Imran Khan has gone a long way, from being an Oxford-graduate, stunningly gorgeous, mythic cricketer to the prime leader of Pakistan, to be deposed in a vote of no confidence, to having promising hopes of returning to power. Khan is likely the only politician in Pakistani politics whose political journey is so marked by variation that it is comparable to reading an epic journey of a fictional hero who, despite having tragic flaws and constantly hampered by obstacles, treks on undeterred, spirited, and resolutely focused on a hardly visible light on the far end of the tunnel.

The achingly spectacular lyric of David Gilmour’s song “Shine on You Crazy Diamond” seems to embody Imran Khan’s life narrative better than any other song.

Upon entering politics, Khan emerged as a rare spokesperson for the voiceless, speaking out against rampant public corruption that the previous rulers believed they had no power to address. The more he realised that politics is an art of the possibility, the more he became an outspoken opponent of U.S.-led foreign policy and a critic of the nation’s leaders for their role in facilitating America’s war. He was able to get the attention he so desperately desired right there.

When Imran Khan was wearing the crown

After running as a nationalist and vowing to fight corruption, improve Pakistan’s faltering economy, and conduct an independent foreign policy that separated Pakistan from the United States, Imran Khan was elected Pakistan’s prime minister in 2018.

Read more here : In the History of Empires, The United States is the Worst Manipulator

Khan took over an almost empty kitty, a failing tax system, and only two months’ worth of foreign exchange reserves. The Khan administration increased power and gasoline rates, disproportionately affecting the poor, to pay off Pakistan’s foreign debts. Anger among the populace was predictable, and Khan has undoubtedly not resolved all of the nation’s issues.

In any case, considering the urgency of dealing with the Covid-19 outbreak, he fared rather well in his efforts. As his critics have pointed out, blaming Pakistan’s soaring inflation on Khan is a particularly sneering slap in the face.

With all that was going on in Pakistani politics, Khan remained upbeat and confident in his position as head of the country. On the world stage, he was more powerful and dominating than any other Pakistani leader since Bhutto who was hanged by the military junta on fabricated charges. During his time in office, Khan attempted to forge alliances with China and Russia as well as Muslim countries such as Iran, Malaysia, and Turkey, in order to create an independent Pakistan.

Last year, Khan’s relatively stable stint in office began to unravel as foreign countries’ discontent with his independent foreign policy reached a climax, and a confrontation with the military over its leadership lost him its support.

He was removed from office in April after a legislative vote of no confidence. Since then, Khan has been accusing the US of plotting his downfall through his political opponents. His case is bolstered further by the Cipher obtained by the Pakistan Foreign Office from the Washington-based Ambassador. Furthermore, his coalition allies abruptly chose to break ways with him – far too abruptly for it to be their idea alone.

Imran Khan refused to throw in the towel

Khan has captured the essence of the people in a manner that few others have. Khan maintains that those in charge currently are thieves installed by the United States, and he has cautioned Pakistani citizens not to vote for individuals with holdings overseas, claiming that their loyalty would never be with the people. He is choreographing a message that many, if not most, Pakistanis understand.

Khan is deftly channelling people’s rage toward the deterioration of the situation — unemployment, inflation, corruption, and anarchy — and mixing it with the frequent claim that the United States is to blame for his demise. This assisted Khan in amassing political capital for his return to power, as seen by his spectacular comeback in the Punjab by-elections. 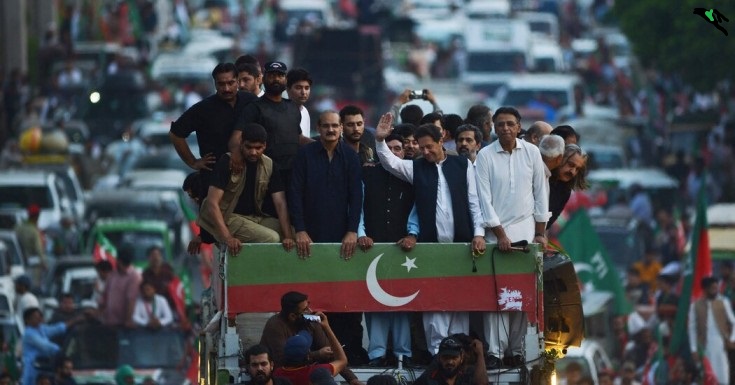 Khan has numerous strengths as a politician, but one persistent flaw when it comes to Pakistani politics. He is not corrupt because of his own temperament or the rules of his profound religious faith. This trait is not just unique in Pakistani politics; it is a devastating disadvantage.

Khan’s honesty renders him inherently unsuitable for the debased ways that the most successful Pakistani politicians have adopted. His strength, though, rests in his determination to take a bullet for his country and to work more than anybody else to set the country on the right track. That is why Khan emerged from the ashes when his adversaries believed they had already burned him.

That is the only explanation for why the conspirators’ and their handlers’ decision to stage a vote of no-confidence against him had such disastrous results. In addition to regaining Punjab against all odds, Khan has also succeeded in selling his anti-establishment message to such an extent that the establishment appears unable to challenge him.

After Khan’s onslaught of assaults on the military, it could not step in and support the PML-N in the Punjab by-elections for fear of popular backlash. Additionally, the decision to admit PTI defectors and provide them tickets to run in the by-elections caused the PML-N to split sharply. Others think the PML-N paid a high price for abandoning its post-2018 narrative of fighting the establishment to remove Khan.

Khan’s tsunami: Too hard to contain?

Imran Khan unleashed a political tsunami that the ruling coalition was unable to contain despite the assistance of the country’s most powerful institutions and unrelenting use of state resources.

The unexpected creation of a government in Punjab by the PTI has exacerbated the political troubles of the incumbent PML-N and PPP alliance. With Khan becoming victorious, it looks like he will become Pakistan’s prime minister again.

Khan may have ridden to power on the strength of the military in 2018, but his current public appeals render the military worthless to him. With the people’s will on his side, he no longer needs shady bargains conducted in shadowy rooms. That is precisely why he desires an early election so that the destiny of Pakistan is decided, in the words of Rousseau, by the “general will” of the country.

And for just this reason, the conspirators oppose early elections. They suspect—and I believe they are correct—that Khan enjoys much greater popularity than they do.

Khan’s popularity is burning hotter than ever because he has succeeded where others have failed: capturing the imagination of the youth, particularly the educated ones. His whole reputation is based on being viewed as the stylish, dashing, liberal Messiah who has arrived after years of rule by political dynasties. He is meant to symbolise the tremendous sweep of transformation, the first rays of sunshine after a storm. All evidence point to the strategy’s success.

When all looked lost in the 1992 Cricket World Cup, Khan famously urged his Pakistani cricket squad to fight like “cornered tigers.”

This time, the mission he had to complete after being ousted was even more impressive. After being written off by the plotters, he overcame tremendous obstacles to shine on the horizon.

4 thoughts on “Imran Khan: The Man Who Never Drop His Bundle”

What are SERPs? Its Meaning, Importance, and Features

An Overview of Maternal Mortality and its Causes

The Rape of the Lock: Summary and Analysis